Jalisco ranks fifth in the states with the most infections in the period from March 20 to 24, according to the update of the predictive model of the University of Guadalajara

COVID-19 cases in Jalisco grew 64%, below the national trend , in the period from March 20 to 24, said the University of Guadalajara when presenting the update of the prediction model on the number of possible infections .

Ricardo Villanueva, Rector General of the UdeG, reported that estimation one of the model calculated a 45% increase in the number of cases at the country level in the five-day period, but in fact it grew 99% .

He noted that in Jalisco there was an increase of 64% in the five days, to be in fifth place in the states with the most infections . Mexico City registered an increase of 112%, followed by Quintana Roo, with 100%. In third place was Yucatan, with 85%; then Nuevo León, with 79%. 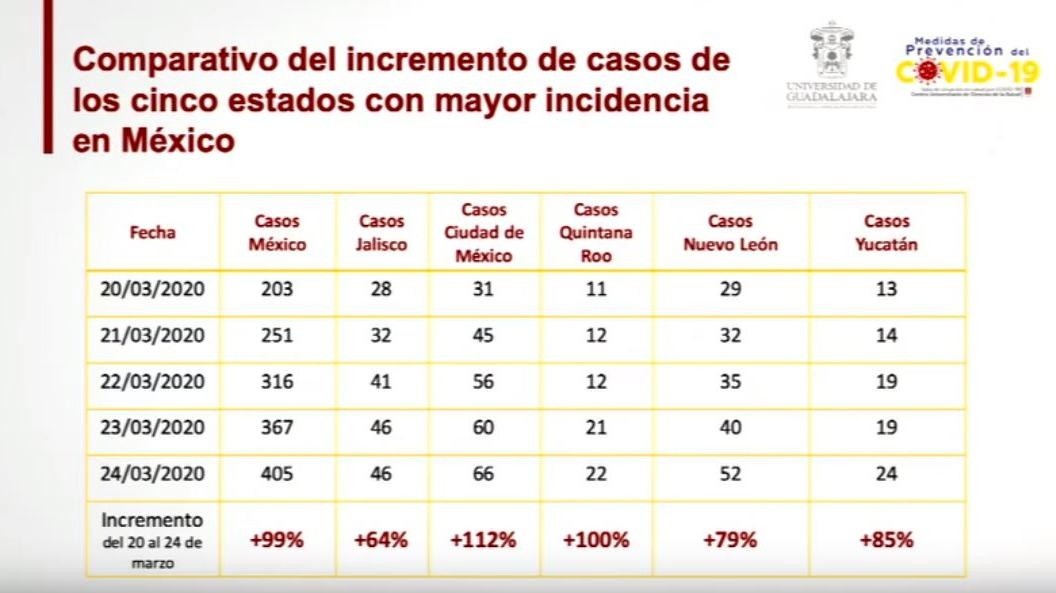 Villanueva stressed that although the data so far shows a slowdown in the cases in the entity, "we cannot claim victory" , so the established measures must continue to be applied.

It also supported the state government's move to extend isolation until Sunday.

On March 20, the university presented a model that estimated that from that day until March 24 it entered a critical stage of high risk of contagion, so it asked the population to stay at home to reduce the spread of the coronavirus. .

The Jalisco government urged the population that same day to remain isolated and stay at home during that period.

Next Supply of basic products is guaranteed for 100 days: SE